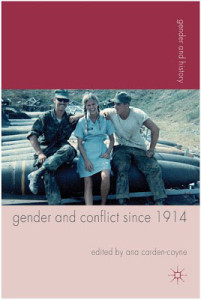 We are pleased to announce a landmark new collection of essays edited by Ana Carden-Coyne, Senior Lecturer in War and Conflict and co-director of the Centre for the Cultural History of War.

Gender and Conflict since 1914: Historical and Interdisciplinary Perspectives is published by Palgrave McMillan in the Gender and History series.

The First World War was a turning point for modern globalised warfare. It involved the inclusion of women in ‘war efforts’, the homefront becoming the warzone, and produced millions of wounded and disabled men. At the same time, it incited an extraordinary arsenal of gendered discourses, practices and beliefs in the service of militarism, power structures and personal agency.

This insightful collection of interdisciplinary essays, by a wide-ranging team of experts, draws out critical themes emanating from 1914. Spanning the First and Second World Wars, through to the Vietnam War, the ‘War on Terror’ and the wars in Iraq and Afghanistan, the volume asks what has changed and what has continued? Ana Carden-Coyne demonstrates adeptly how understanding gender during periods of conflict has ongoing relevance across the twentieth and twenty-first centuries.

The volume addresses students needs and asks WHY HISTORY MATTERS TODAY – historians discuss the legacies of gender and conflict, asking: Has there been much change over time with the current situation in the world today?

Highlights from the volume include subjects such as a rare insight into the experience of women on the front lines during the Vietnam War; and women today working as intelligence interrogators on the frontline in the Iraq War; the masculinity of the terrorist; women’s experiences of PTSD usually associated with men in combat; civilian internment and the gendered violence that both men and women experience; and the subject of disabled soldiers.

‘Ana Carden-Coyne and her energetic contributors…are our intellectual land mine defusers. If we, their fortunate readers, read their findings slowly, if we pause to mull over their comparisons and causal revelations, we just might make it safely across the minefield of militarized gender politics to draw useful lessons on the other side.’

‘The essays work well together and in juxtaposition….The individual contributions, and the collection as a whole, all shed new light on the topics addressed.’ –