CONGRATULATIONS are due to our own Dr Allan Kennedy, who has won the prestigious Frank Watson Book Prize 2015 for his first book, Governing Gaeldom: The Scottish Highlands and the Restoration State. 1660-1688 (Leiden, 2014). The prize is given every two years by the Centre for Scottish Studies at the University of Guelph, Ontario, to the best book in Scottish History. For more details, see link here.
As well as receiving cash award, the recipient is invited to deliver a lecture to the Centre for Scottish Studies’s Fall Colloquium, which this year took place on Saturday 26 September. Dr Kennedy accepted this invitation, and spoke on ‘The ‘Othering’ of the Highlands and Scottish State Formation in the Seventeenth Century’.

Interview with Dr Kennedy: What inspired you to write the book?

Governing Gaeldom explores the relationship between the Scottish Highlands and the wider Scottish and British polities during the reigns of Charles II (1660-85) and James VII & II (1685-8). Its primary concern is to investigate how the Highlands were governed during this period, and in order to achieve this it also offers an extensive analysis of the social, political, economic and cultural connections between centre and periphery. Starting life as a doctoral thesis submitted to the University of Stirling at the end of 2011, the book was inspired partly by my background; as a native of the city of Inverness, I am myself a Highlander and have always been interested in the region’s history. But there were also clear academic reasons for writing the book. Scottish history has enjoyed something of renaissance since the mid-twentieth century, and is now a vibrant and diverse field. But glaring gaps remain, and the Restoration is one of the most noteworthy; the corpus of published work was very thin when I started out, although Governing Gaeldom now forms part of a much-expanded historiography. Equally, I always felt dissatisfied with the generally superficial treatment accorded to Highland themes by most – although by no means all – Scottish historians. There was, therefore, an historiographical and intellectual gap which I felt needed to be addressed. At the same time, it seemed clear that acquiring a deeper understanding of the Highland experience during the later seventeenth century would help shed welcome light on the nature of not just Scottish but also British society during a period of profound change, while also offering a fresh perspective on ongoing processes of state-formation. I hope the book is able to make such a contribution, and I am delighted that the Frank Watson Book Prize committee have chosen to honour it amongst a large field of high-quality scholarship. 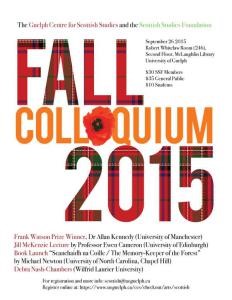