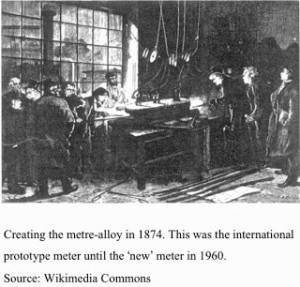 Inching Towards the Meter:

May 20th 2015 is ‘World Metrology Day’. The theme for 2015 is ‘Measurements and Light’. Historically, light has had a special significance in modern metrology, which is the science of measurements. In October 1960, the International Bureau of Weights and Measures (BIPM) redefined the metre as ‘the length of the path travelled by light in vacuum during a time interval of 1/299,792,458 of a second.’ This incredibly precise definition de-linked the meter from a physical artefact that was artificially constructed and preserved since 1889 in BIPM’s facility in suburban Paris. It finally fulfilled the dream of the French scientists in the 1970s who had originally sought to create an entirely new system of weights and measures on the basis of a natural constant, free from human subjectivity and concerns. What we now generally refer to as the metric system was intended to be a departure from ancient systems of weights and measures that were sullied by feudal relations, human custom, and political failings. The 1960 definition of the meter in terms of the ultimate natural constant – the speed of light – brought this vision into reality.

Modern metrology in Europe grew from Enlightenment ideals: the ability to define an objective system of weights and measures based on an universal natural constant. This meant measurement units used in everyday situations could always be reconstructed accurately and precisely and without subjective bias. French scientists considered the multitude of customary measures in eighteenth-century to be confusing, inaccurate and discriminatory. In Britain, there were parallel efforts to unify the variety of weights and measures used. Variety had led to situations where the gallon used to measure wine was different from that used for ale, and the bushel used for measuring coal was different than the one used for wheat. While the French preferred to base the meter on what at that time was considered to be a natural constant – a meridian of the earth from the north to the south pole – British scientists defined our Imperial system of weights and measures on another natural constant – the so-called ‘seconds pendulum’. The seconds pendulum gives us a length measure such that the time taken for it to swing from one end to another is exactly one second. The standard yard was defined in 1824 on this scientific principle and formed the basis of the British Imperial system of weights and measures. The ability to reconstruct national measurement standards was put to test when the precisely constructed standards were destroyed in the fire that burned much of Westminster Palace in 1834.

The new definition of the meter in 1960 embodies elements of both the French and British visions: a system of measurement based on decimal relationships, and time as an important element in defining the fundamental unit of length. In Britain, the metric system has had a difficult history since it was first conceived and defined. The French and British scientists had sought to collaborate in defining a universal measurement system in the mid-eighteenth century. We know this from the correspondence between the Royal Academy in London and the Academy of Sciences in Paris. But the French Revolution and differences in opinion between individual scientists meant that eventually the two groups pursued different ways of designing new metrological systems.

When European countries began adopting the metric system after it was exhibited at the Great Exhibition of 1851 in London, interest within Britain increased in the 1860s. British metrology was by no means behind French metrology. Joseph Whitworth had built a highly precise measuring instrument capable of measuring fineness to one-millionth of an inch, which was displayed at the 1851 exhibition. However, advocates of the metric system stressed the advantages of metric system more broadly for industry, international trade, organising statistical information and in science. Parliament came very close to voting to make the metric system compulsory in Britain in 1871: this bill was narrowly defeated by five votes. As many other nations made metric measures compulsory to use (Germany, Italy, other countries in Europe and South America) there was general expectation that Britain and the United States would soon convert to the metric system. Such expectations were heightened when the United States became a signatory to the International Treaty of the Metre in 1875 and Britain followed soon thereafter. In Britain, metric measures became legal for use in domestic trade and commerce in 1893, and by 1963 the British imperial units were defined in terms of the metric units. Thus, for all practical purposes, the metre became a fundamental unit in British metrology.

In 1965, Douglas Jay, then the President of the Board of Trade, announced the metrication policy citing British industry’s keenness to switchover to the metric units. The policy followed a series of surveys such as the one by the British Association for Advancement of Science published in 1960 titled ‘Decimal Coinage and the Metric System: Should Britain Change?’. Western Europe was emerging as Britain’s major trading partner and competitor. In addition, other Commonwealth nations had changed or had announced their intentions to change to the metric system. India had converted to decimal currency and metric system in 1956. South Africa, New Zealand and Australia were all eyeing decimal coinage and metric conversions. Japan had also finished its metric conversion by 1962. Crucially, following the launch of Sputnik by the Soviet Union in 1957, there was increasing pressure within the United States to increase metric usage in scientific education and in its industry.

The discourse stressed that failure to convert to metric system would leave British industry uncompetitive and damage its ability to retain its share of world trade, which had already shrunk in the post-war years. Fear of being left behind had prompted industry to push the government to announce a metrication policy, although not all in industry were convinced of this move. ‘Going Metric’ was the metrication programme announced in 1967 by Tony Benn, who was then Minister of Technology, and in combination with decimalisation of currency was intended to increase British economic performance in an increasingly competitive global economy.

The best laid plans have a tendency of going awry, especially where the economy is concerned. The decimalisation of British currency was effected on ‘D-Day’ 15 February 1971. Unfortunately, the timing of this change could not have been worse. Decimalisation coincided with one of the worst episodes of price inflation in post-war Britain. As a consequence, many people blamed the rising price inflation on currency decimalisation. People viewed the expected metrication with similar concerns and political rhetoric fed into such fears. To top it all, British accession to the European Common Market in 1971 came with strings attached: the harmonisation of measurement units to the metric system. With anti-metrication becoming increasingly vociferous, metric conversions in industry slowed down, especially in the retail sectors and in consumer sectors. Promises were extracted from the government to retain the use of ‘pints’ for milk bottles and in pubs, and of ‘miles’ for road signs.

The result was that by 1978 government had to scale back plans to increase metric use amongst the general public. Many industries had already converted voluntarily with the expectation of widespread change and at great cost (e.g. carpet manufacturers). They found themselves in an untenable position of either having to switch back to imperial units or remaining uncompetitive in domestic markets to other firms who continued to use imperial units. At best there was confusion. Shoppers were unsure if they would eventually be asked to purchase meat and apples in ‘kilos’ rather than pounds. School children who had studied metric units found they had to learn imperial units after all. Confusion made a bad economic situation worse. Manufacturers had to carry extra inventories of same products, some in metric units others in imperial.

The metric system was not going to go away as many people had hoped. Part-metrication was turning out to be worse than metric conversion. The stalemate was broken when Thatcher’s government pulled the plug on any further metric conversions in 1979. We now know that this only delayed metric change for another decade until Britain became even more integrated with the European economy after 1990. Successive government’s after 1994 have introduced a series of legislations that resulted in British metrology being based on the metric system after all. Despite this many of us can still buy a pint of ale, travel miles to meet friends and family and anxiously watch our weight in stones and pounds after a sumptuous meal.

On World Metrology Day this May 20th, we should reflect on how modern metrology has changed our daily lives. GPS, mobiles, food safety standards, air travel, and modern medicine all require sophisticated measurement systems to function. But it is also worth thinking about how much metrology is a result of social values as much as it is about scientific achievements. In addition to precision, daily measurements have to make sense to people who use them. Modern technology has made it easier for us to convert miles into kilometres once we cross our borders. However, our fears and concerns make us susceptible to exaggerating the effects of change that new technologies usher in. We crave the ease with which technology makes things simple, and yet we cannot help but cling on to symbols of tradition that it threatens to dislodge.

‘Declinist’ fears have historically fuelled both sides of the metric debate and continue to do so even today. The metric system underlies all of modern technology. In some ways it is insidious. The imperial scales used to measure pounds of apple that we buy are calibrated to metric units. Britain is now a metric nation. Will the British ever embrace the meter? That remains to be seen. We have ‘inched towards the meter’ for over 200 years. It may be time to embrace the light at the end of the measurement tunnel.

Aashish Velkar is Lecturer in Economic History at Manchester. He is currently researching the global diffusion of metric measures in the nineteenth and twentieth centuries. His has earlier published a monograph Markets and Measurements in nineteenth-century Britain, Cambridge University Press, 2012.