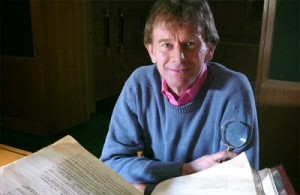 The University of Manchester’s new Professor of Public History, Michael Wood, is holding the second of three Postgraduate master classes on Tuesday, 26 November, 2-4pm in Coupland 1, Pear Theatre. Michael is one of the country’s best loved historians, having been a regular face on TV screens for over three decades. A native Mancunian, Michael has made well over a hundred documentary films, including ‘The Story of England’ (BBC 2010), ‘The Story of India’ (BBC 2007), and ‘Conquistadors’ (BBC 2000), to name but a few. He is also the author of numerous best-selling history books.

There is no need to register – just show up!

The master classes will focus on the forthcoming major BBC series on the history of China, which Michael is writing and presenting. This exciting new series is currently in production.