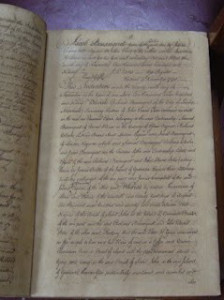 In collaboration with the University of the West Indies, Dr Laurence Brown is engaged in a project to digitise and preserve the unique historical archives of the island of Grenada in the Eastern Caribbean. In 2004 Hurricane Ivan destroyed Government House and many of the other public buildings on the island causing substantial losses of historical records dating back to the 1760s, and the displacement and deterioration of surviving material.

Grenada was at the intersection of the British and French Empires during the second half of the eighteenth century, and the surviving records provide a rare vision of how the societies of the Caribbean experienced the revolutionary 1790s and later transition from slavery to emancipation.