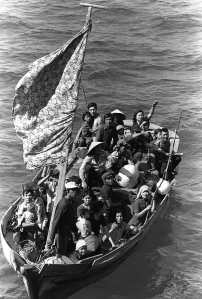 I’ve been teaching a course on ‘Refugees in modern world history’ for several years and I wrote a book as a result – see http://ukcatalogue.oup.com/product/9780198744474.do). Never has the subject seemed timelier or more troubling than in 2015. Here are a few short observations about what historians might contribute to public debate. I shall be exploring these and other issues with my students this semester. There’s much more to say, so expect more posts as the course develops! Here I reflect on two questions: what might tomorrow’s history of the refugee crisis look like; and how might history challenge our parochial grasp of current events?

How will tomorrow’s historians write about the refugee crisis? Social historians may ask questions about refugees’ aspirations, the journeys they attempted, and the people they left behind: but whether this will be written up as a history of ordeal and pure loss, or of adventure and opportunity, remains to be seen. Cultural historians could engage productively with representations of ‘Mare Nostrum’, the name given to Italy’s original search and rescue mission in the Mediterranean, and its replacement by a more restricted programme ‘Joint Operation Triton’, named after the Greek God, messenger of the sea. Perhaps cultural historians will reflect on the powerful image of the ocean and the beach in the life (and death) of refugees – in the late 1930s, refugees from the Spanish Civil War were ‘beached’ in the south of France where their living conditions were recorded by the famous photographer Robert Capa. Jewish refugees from Nazi Germany photographed themselves on the beaches of the Dominican Republic after the dictator Rafael Trujillo decided to admit them in small numbers. Looking beyond Europe, historians will want to recall the significance of the Pacific Ocean to Vietnamese refugees who took to small boats in search of a place of safety, images that circulated widely during the late 1970s. (above)

Who knows, maybe the passage of time will enable future historians to make something of the fact that far more people drowned in the Mediterranean in the course of 2014 than lost their lives in the 9/11 attack on the Twin Towers?

I suspect that political historians will write about the events of 2015 as a crisis affecting two institutions that emerged in the wake of the Second World War, viz. the Common Market, forerunner of the European Union, and UNHCR, the office of the United Nations High Commissioner for Refugees. The effectiveness of both institutions has been called into question. Critics point gleefully to the lack of genuine cooperation between EU member states over the refugee crisis. UNHCR is accused of lacking teeth; there are even calls for the 1951 Refugee Convention to be torn up for having outlived its usefulness. Historians can at least dispel some of the myths around the origins of both institutions, by explaining that they were the outcome of hard diplomatic bargaining that preserved rather than undermined state sovereignty. Having survived upheavals in the past – such as large-scale refugee crises in the 1970s and 1980s, and EU enlargement in the 1990s – perhaps these institutions can weather the current storm and enhance rather than lose their legitimacy.

Historians are also well-placed to challenge the parochialism of debate, particularly in the UK but also in other parts of Europe, notably the failure to take account of the fact that most of the world’s refugees never show up on Europe’s doorstep. More than 85 per cent of the world’s refugees live in the ‘global South’, and this has been true of refugee history for more than half a century. This is partly about geography: today, Lebanon and Turkey are the chief destinations for Syrian refugees, but history has a lot to say about the complex history of population displacement in the Middle East, such as in the aftermath of the First World War and the dissolution of the Ottoman Empire, from which Syria emerged as a mandated territory of France, with Britain taking responsibility for Iraq and Palestine. Each of these countries along with Lebanon housed large numbers of Armenian and Assyrian refugees who along with Russian refugees dominated debates in the new League of Nations throughout the 1920s. The Second World War brought further upheaval, above all the displacement of Palestinians as a result of the creation of the state of Israel, who fled in large numbers to Lebanon, Jordan and Syria. One troubling consequence of the current crisis is that hardly any attention is being paid to Palestinian refugees in war-torn Syria. The history of refugees in the Middle East is a history of these twentieth-century entanglements. And I haven’t even started on other sites of persistent mass displacement …

There’s a lot more to be said – about the discourse in UK politics around its so-called ‘proud tradition of welcome’ (my spirits sag each time a politician utters this phrase), and how this connects with the real life experiences of refugees now and in the past; and about the ways in which current debates and perspectives efface refugees’ own sense of history, their aspirations, and their capabilities. More on this in subsequent posts …