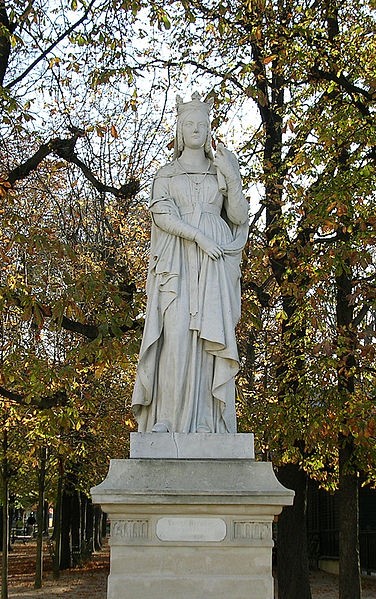 Twenty years ago along with an American colleague I published a translation of and commentary on various Merovingian sources from seventh century Francia (France).  Amongst them was the Life of a Queen Balthild who turned out to be very unusual.  She had been a slave who married a king and gave birth to three other kings. As a widow, she ruled on her sons’ behalf whilst they were children, and she ruled, it seems, with an iron rod.  As soon as the eldest son reached majority age she was packed off to a nunnery where, over the next 15 years or so, she sat on the sidelines of power, being, one imagines, very cross indeed.  She died in 680 and was made into a saint – hence we had material we could translate.  No less than nine other writers mentioned her, which is truly remarkable for such a distant figure.  Not only that, but we also have her shirt, her burial robes and some of her bodily remains, all preserved in the parish church that was built much later near her nunnery, her relics  having survived the vicissitudes of over 1300 years of turbulent history.   Her shirt (or maybe tabard) conveys a sense of sadness or even bitterness – it is embroidered with yellow (not gold) thread and depicts the symbols of a queen-ship  she no longer enjoyed.   One writer tells of how she sorrowed when parted from her jewels, and we can see jewels embroidered on the shirt.  She was about 45 when she died, and we have a braid of her hair –she had been blonde, was going grey and was now dyed strawberry-blond.  Her burial robes were gorgeous silks.  She was not all the humble nun her ‘Life’ portrays.  We also know that she was English.

In our 1996 work we hypothesised that Balthild was born in East Anglia, that she was maybe of royal stock there, but had been captured  and enslaved in warfare in the 640’s.  For this we relied on fairly extensive circumstantial evidence of contacts between people in East Anglia and the man who became her master as slave, and we matched events in East Anglia and Francia to provide a context and narrative that fitted with her biography.  We were, I must say, rather successful  and our version Balthild’s eventful life was widely accepted.  Then in 1998 a Norfolk farmer out with his metal detector near Norwich turned up a tiny gold ring with her name on it. 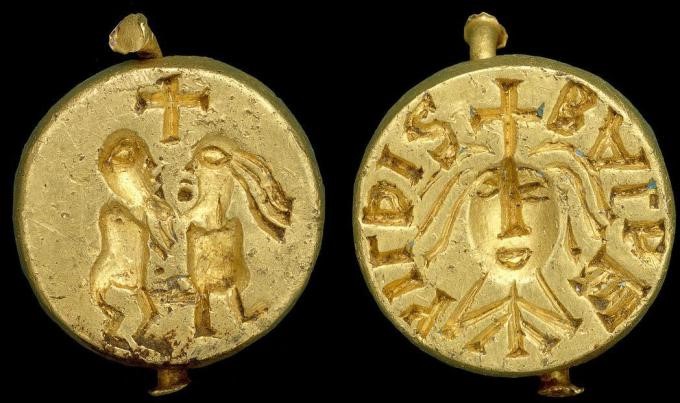 As you can see, it is lettered right to left, that is backwards:  BALDEHILDIS.  It is backwards because this is a seal matrix.  Notice the two pins at the ends.  This shows that is swivels so that you could make an impression of either side.  On the reverse of the name side, we seem to see a couple having sex beneath a cross.  The ring is 98% pure gold.  Seals suggest documents, and documents suggest authority and ruler-ship.  But sex?  Perhaps this was to show that she was a  mother of kings, and the wife of a king, thus a queen.  I was flabbergasted at the find.  What were the odds of finding such a tiny thing (not much bigger than  a five pence piece) that belonged to the one woman we know most about in Western Europe in the seventh century, and of it being just where we hypothesised  that she had come from?  After two years of cleaning (why didn’t they just run it under the tap?) it was transferred to the Castle Museum at Norwich, and speculation began to fill the gaps in our knowledge, not least as to how it got to Norfolk if it had come from Francia.  If in doubt, blame the Vikings who were always picking things up in one place and dropping them in another.  Or was it sent as cry for help from Balthild’s convent prison?  Denied the title of queen, was she making the same point that she had made with her needle on her shirt?  Anyway the speculation settled down to harden into ‘fact’ :  it was Balthild’s ring, she was queen,  and she was feisty.  As the title of a silly article in the Independent newspaper put it in June 2014, ‘Erotic seal shows Anglo-French entente was once extremely cordiale’.

I myself was, however, beginning to have doubts, if only because I could not accept the odds.  Then about ten years ago, I tried to discuss the matter with a Belgian scholar for whom I have great respect.  He was having none of it:  given the odds against finding such a tiny object  at random, in a field, and belonging to the one person we know most about, it had to be a fake.  I shut up.  Teaching an MA class about the ring a few years ago I mentioned the possibility of it being a fake, but asked who would have had the motive to plant it in the field.  The answer came back instantly;  ‘You’.  Oops.  Best not draw attention to it any more.

Asked to write in honour of a Japanese scholar with whom I had talked about the ring, I decided, finally, to review the whole matter.  Firstly, I think we came on too strong in 1996.  There were circumstantial connections between Francia and England but no concrete correspondence between the two.  Although Balthild’s ‘Life’ said she was a ‘Saxon from beyond the sea’ this could be from anywhere.  No other source says she was English.   Although the ring is for sealing, no-one sealed documents without a title (king, queen, count, bishop etc.).  And they weren’t having sex – further cleaning showed that couple were clasping hands.  And the man is bald and bearded, and Frankish kings always had long hair and generally no beards.  And actually you cannot tell the gender of the person beneath the name.  And the execution of the design is very crude for a figure depicting authority.  But why East Anglia, and how come the name is right?.  Well, we simply can’t know that there weren’t other Balthilds, even though the name is unique to us.  And East Anglia is a good place to find things.  Since metal detectorists came on side, as it we, we have lots of what are called ‘singleton-finds’, that is, object seemingly found at random without archaeological context.  A couple of years ago another ring of a comparable fineness and of mid seventh-century date  was found, again by metal detector in a field in North Essex.  Why East Anglia? Because it has big open arable fields which turn up stuff through ploughing, and it is sparsely populated, so that objects have not been buried under urban settlement.  I have been told (though I may have been being teased here) that literally busloads of people from round here go on metal-detecting   trips to East Anglia.  So I think I will have to stick with the odds and say that the ring is very unlikely to have been our Balthild’s ; all the pieces of the jigsaw don’t quite fit around it.  And there is a very serious lesson here, in that we tend to manufacture contexts to fit artefacts, and are often in danger of then using the artefact to confirm the context.  So we must stick with hard forensic reasoning and not be to over speculative when we meet a weird and wonderful object.  On the other hand, it might just be Balthild’s…. what a person, what an object, and what a find to cap her remarkable life!