On Brexit day (23 June 2016), The Guardian reminded its readers about the ‘Euro myth’ of how European metrication laws had criminalised the use of the Imperial inch such that even the Queen was forced to ‘obey Europe’.[1] Since then, there have been several reports in the popular media about the need for Britain to abandon the ‘European’ metric system and return to its ‘traditional’ imperial measurement system.[2] These reports are yet another reflection of the festering anti-Europe sentiments and the perception that joining the EU led to the ‘loss’ of British sovereignty. Such popular sentiments may be traced to the EEC Directives aimed at harmonisation of ‘technical’ standards such as measurement units (e.g. 71/354/EEC). Harmonisation was one of the key principles of economic integration established by the Rome Treaty in 1957, primarily aimed at eliminating trade restrictions within the European communities. The case of the metrication policy in the 1970s clearly demonstrates how conflicting ‘framing’ of the pro- and anti-metrication arguments in popular politics led to the abandonment of the metrication policy, exacerbated the uncompetitiveness of British industry, and crystallised the popular perception that Brussels was imposing European laws that the British parliament had no choice but to implement. 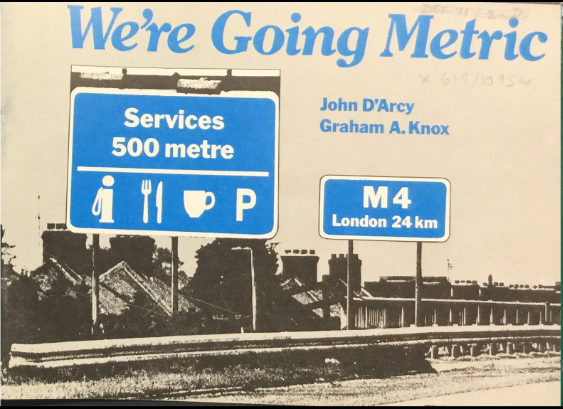 The metric system was not imposed on Britain upon joining the European Communities between 1973 and 1975. This decision was made almost a decade earlier by Wilson’s government in 1965, when he promised at an EFTA meeting that the UK will adopt the metric system as its primary system of weights and measures. No doubt Wilson’s commitment to inch closer to Europe by giving up the imperial inch was made in anticipation of Britain’s application to join the EEC. The British industry had lobbied fervently between 1955 and 1965 for the adoption of international measurement standards. Most major associations such as the Confederation of British Industries, British Association for Advancement of Science, and the Trade Unions Congress (TUC) supported the policy of complete metrication.

In the early 1970s, even as political opposition to creeping metrication was crystallising, much of the popular literature on the subject conveyed a sense of inevitability concerning metrication in everyday lives. People did not like the change to metric measures – just as they had not liked currency decimalisation in 1971. However, most were prepared to go along with it. Popular opinion against the metric system really hardened following the high inflation in the mid-1970s. Opinion polls between 1972 and 1975 suggest that between a third and a quarter of those surveyed blamed currency decimalisation for high inflation (almost as high as those who blamed inflation on the decision to join the EEC). This view was exploited by several politicians who claimed that metric change was not in the interests of the consumers. In this period of ‘collective puzzlement’, when even experts were divided about the causes of inflation and how to tackle it, the linking of price increases to change of measurement units provided yet another reason to attack metric change. Media reports that EEC directives were compelling the British government to effect this change by 1978-79 added to the popular view that Europe was imposing its laws on Britain. The fact that Brussels had threatened to take the British government to court if it did not complete the metrication programme added fuel to this fire. The British government negotiated with EEC and secured a way of retaining the most popular Imperial units such as the pint and the mile in an amendment to the original EEC directive. The anti-metric lobby claimed this as a victory of how the principle of ‘free choice’ had triumphed over the ‘compulsory metrication’ that was being imposed upon Britain.

Meanwhile, British industry found themselves in an intractable position. Many firms had voluntarily converted to metric units anticipating economic gains in the long term. However, the political resistance to metrication of retail sectors meant that most industrial sectors could not entirely switch to metric units. This was a worst-of-both-worlds scenario. Using the imperial units for some operations in addition to using metric measurements meant firms had to carry extra inventory, incurred higher design costs, and added to the general confusion by operating on multiple standards.

The historical research shows that popular opinion was shaped by little factual information or over-simplification of quite complex economic issues. Framing of opposing arguments involved selecting particular bits of information to highlight, to the exclusion of other (often contradictory) information. The more that one group framed an issue in a particular way – such as EEC directives meant a loss of sovereign law-making powers for Britain – the more that particular bit of information gained salience over other information. Such historical analysis is useful in demonstrating how certain arguments dominated over others. The arguments that metrication of retail sectors was harmful for the consumer and that industry was exaggerating the consequences of dual measurement standards is an example of this. The argument that limiting metric conversion to industry was worse for Britain in economic terms received almost no traction. Analysing how people frame arguments potentially helps unpack why public opinion is shaped in ways that is contrary to ‘expert’ opinion. Certain frames, loaded with political rhetoric – such as metrication means giving up British tradition and heritage – can trump economic logic, as the Brexit debate has clearly demonstrated.