Penny Summerfield (Emerita Professor of History at University of Manchester) recently published a new book, Histories of the Self: personal narratives and historical practice (Routledge, 2018). As she explains, the book was inspired by teaching courses on personal testimony and historical research at Manchester.

One of my favourite courses, when I taught at Manchester, was a Masters module entitled ‘Personal Testimony and Historical Research’. Students evidently enjoyed it. But some of them also said they would have liked more on the ways historians use personal narratives in their own published work. When the History MA modules were reorganised and this one disappeared, I decided to write a book discussing just that – the numerous and varied uses that historians have made in the last forty years or so of a variety of types of personal narrative. 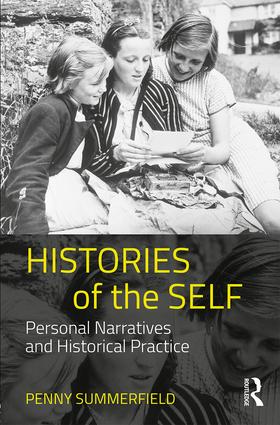 The challenges of using personal narratives include confronting the issue of referentiality, that is the extent to which such narratives refer to ‘real people’ and ‘what actually happened’. The creative process of constructing a history of the self, whether in writing or orally, involves the elaboration and interpretation of events, and binds subjectivity into the account. Some historians seek to keep subjectivity at arm’s length, and justify the use (nevertheless) of such subjective sources in terms of the relative reliability of personal narratives. They compare them with, say, newspaper reports, or make claims that some parts of the content, such as accounts of repeated experiences like the daily work routine, are more reliable than other aspects, such as stories about family members or public events. To paraphrase the oral historian Daniel James, their quest is to track the beast of historical objectivity down to its lair and extract the facts. But subjectivity is not such a dirty word for historians these days. The importance of the meaning of the past for those who made and were made by it is widely acknowledged. Much historical practice is devoted to discovering the many different ways in which the interpretive and emotional content of life stories can help us understand the social and cultural world in the past.

My book explores historians’ uses of four genres of personal narrative – letters, diaries, memoirs and oral histories – in separate chapters. It looks, for example, at the ways historians have on the one hand read letters for the facts they offer and on the other as constructions of the self and the other. It considers historians’ uses of diaries for their social observations, and also for the access diaries give, often via contradictions and incoherence, to the psyche. It reviews historians’ attempts to use the content of memoirs as quantifiable data, and, in contrast, as documents in which the past meets the present and is rethought for present day readerships. It considers the early challenges to the ‘reliability’ of oral history, which I remember well as a young scholar in the 1970s, and it explores historians’ engagement with the meanings of evasions and silences in interviews, as well as the interaction of spoken memory with popular culture.

One of the really exciting things about researching the book was reading outside my own specific field, which is twentieth-century British history with a focus on gender in the Second World War. I discuss, among many other examples, the work of historians on women’s writing in fifteenth-century Florentine anthologies known as ‘zibaldone’; working-class memoirs of the period of industrialisation in Europe; an early twentieth-century diary from Ibadan, now in Nigeria; Soviet autobiographies of the 1920s and 30s; and oral histories of the Peronist period in Argentina. It was sometimes hard not to get drawn into the vigorous historical debates that such work has stimulated, but I kept reminding myself of my purpose in writing the book, which is to examine the uses historians have made of personal narratives – their methodologies – rather than the substantive issues they raise.

Some historians have been anxious about the representativeness of personal narratives as historical sources, and so I included a chapter that addresses their approaches to selecting samples and using single cases. I explore examples of historians who strive for ‘representative samples’ of, say, memoirs or oral interviewees, as well as those who seek to maximise what the sociologist Michael Rustin calls the luminosity of the single case. One of the claims about personal narratives is that they offer ‘authenticity’, and in the concluding chapter I consider what historians have meant by this, as well as what happens when we use multiple – and unusual – genres of personal testimony. Indeed, historians are getting ever more adventurous as they reconstruct past lives and subjectivities through unusual sources, such as scrapbooks, songs, photograph albums, embroidery and graffiti.

The turn to the personal has been one of the biggest changes in the discipline of history over the past three or four decades and it has been crucial to the exploration of gender, sexuality, class and race. The message of the book is that engagement with the personal has not narrowed the focus of history but has enabled historians to study the self in the context of, and for its contribution to, social, cultural, political and economic processes across the globe, as well as over the centuries, in ways that are essential for our historical understanding.