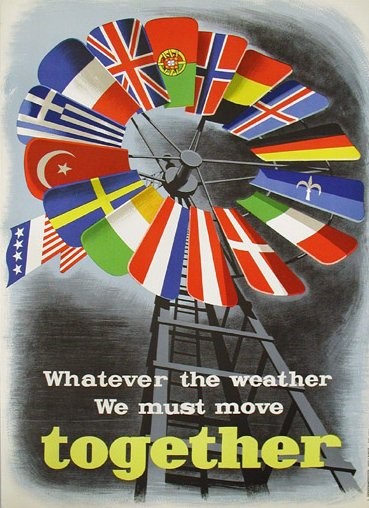 One of a number of posters created by the Economic Cooperation Administration, an agency of the U.S. government, to sell the Marshall Plan in Europe. Image courtesy of Wikimedia Commons.

Last month, Greenpeace released documents from a secretive and controversial free trade deal currently being negotiated by the EU and US government. The proposed Transatlantic Trade and Investment Partnership (TTIP) would reduce restrictions on EU-US trade but critics argue that the deal would encourage privatisation of public services and make it easier for multinational corporations to circumvent regulation. President Barack Obama’s references to the TTIP also provoked ire in April as he commented on the implications of Britain leaving the EU. The President argued that, following Brexit, a US-UK trade deal would be placed ‘at the back of the queue’ as Washington would continue to prioritise ‘negotiating with a big bloc, the European Union, to get a trade agreement done’. Some interpreted these comments as an implied threat and, indeed, Obama would not be the first US President to pressure the British government into supporting US trade policy.

Current US efforts to propagate free trade can be traced back to the Great Depression when, as part of a broad effort to stimulate domestic industry, President Franklin D. Roosevelt sought to create export markets for US goods. From 1933, Washington focused on securing free trade agreements with Latin America which, in addition to purchasing US exports, could provide cheap raw materials for manufacturing. The eruption of war in Europe in 1939 led the US government to place further emphasis on pan-American free trade as a means of encouraging economic stability and solidarity throughout the Western Hemisphere. US officials argued that, in general, trade fostered broader international cooperation while protectionism increased competition and, consequently, the likelihood of war. US Secretary of State Cordell Hull in particular worked on the basis that ‘unhampered trade dovetailed with peace; high tariffs, trade barriers, and unfair economic competition, with war.’[i] As Warren F. Kimball alliteratively argues, for US officials, ‘[p]romoting peace and profit simultaneously was an appealing policy.’[ii]

By 1941, the US government was ready to globalise its free trade programme and, in his State of the Union address of 6 January, Roosevelt declared it necessary to obtain ‘economic understandings which will secure to every nation a healthy peacetime life for its inhabitants — everywhere in the world’.[iii] However, free trade was at odds with the British system of imperial preference which had been introduced in 1932 to combat the effects of the Great Depression. This system placed prejudicial tariffs on imports into the British Empire and needed to be dismantled if the US government’s free trade agenda were to become truly international. Yet despite consistent US efforts to persuade the British to open up their Empire to free trade, the imperial preference system remained in place throughout the Second World War.

By 1948, with the Cold War dominating post-war international relations, Washington officials had become concerned that the impoverished populations of war-torn Western Europe might embrace communism as a solution to their hardship. As a result, between 1948 and 1951, Washington provided Western Europe with billions of dollars in ‘Marshall Aid’ to support its economic recovery. There was also a commercial motive behind the aid programme as US officials understood that strengthening the capitalist economics of Europe would ensure a healthy market for US exports. European governments who received Marshall Aid pledged to reduce barriers to trade while, during the same period, the US government made a further effort to reduce tariffs by taking a leading role in the establishment of the General Agreement on Tarrifs and Trade. Yet, despite US pressure, the British government was again able to secure exemption for imperial preference and the system only came to an end due to the breakup of the Empire and the UK’s entry into the European Community.

Within this context, Obama’s desire to ensure British participation in the TTIP’s free trade arrangement seems consistent with his predecessors’ efforts to secure US economic interests. In fact, Historian Michael J. Hogan has argued that the caveats attached to Marshall Aid played an important role in encouraging the post-war integration of Europe that has culminated in the current EU.[iv] It is perhaps unsurprising then that the US government would act to protect the European single market that it helped to create.