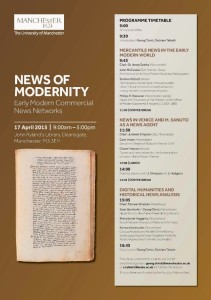 This workshop proposes to investigate the role of news in mercantile networks in Europe, the Eastern Mediterranean and the Atlantic World. The importance of news for business is uncontroversial and news in the early modern commercial world has been the focus of a great wealth of studies. Mercantile news networks  have also been studied, although less. News as raw material for chronicles and hence the relation between news and historiography as well as the use of scientific computing to enhance the study of news by contrast seem underexplored. We thus investigate the history of early modern mercantile news management from a multi-disciplinary angle with a special interest in news as an agent of history and historiography. A special focus will be on Venice as a centre of information and communication in the early modern period, including the chronicle (diarii) of M. Sanuto (the Younger) .