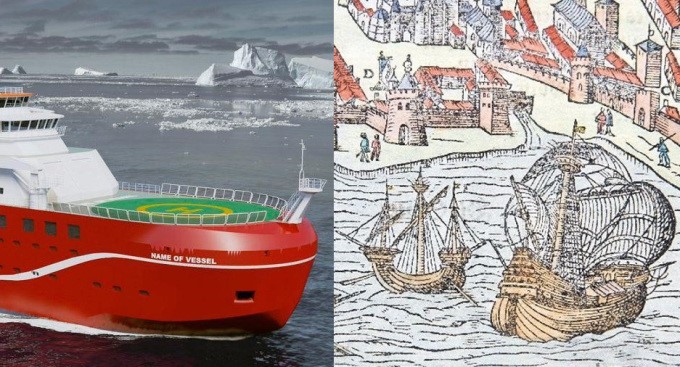 Last month, the Natural Environment Research Council invited the public to propose names for its new £200 million research vessel. [1] NERC intended to inspire people to read more about polar history and to generate interest in the ship’s future activities. It captured the public imagination, but in the most unexpected of ways. One man suggested RRS Boaty McBoatFace, precipitating a flood of irreverent submissions. Although he has since denounced his entry, voting instead for RRS David Attenborough, RRS Boaty McBoatFace topped the poll by a huge margin. [2]

Having reserved the right to make the final decision on the name, NERC is now faced with a difficult task. Should it embrace the humour offered up by the public, and in doing so develop the budding sense of ownership that people feel for the ship and its activities? Or should it supply a name that is both dignified and relevant, but risks making the organisation appear elitist?

Who would have thought that naming a ship could be imbued with such cultural significance? In the course of my research into royal ceremonies performed during the Royal Tour of France (1564-1566), I came across an example that led me to examine the changing symbolism of christening sea vessels in sixteenth-century France. In November 1564, King Charles IX and his mother Catherine de Médicis entered the port city of Marseille. During their stay, the court boarded a new galley to witness the celebration of Mass. They then baptised the ship Charlotte Catherine. [3]

It was not uncommon for the royal family to lend their names to ships. When construction on his new and most advanced warship was completed in 1519, Francis I named it La Dauphine in honour of his heir Francis, who had been born the year before. [4] Francis I viewed the vessel as a symbol of the promise of the future: it would explore new territories, fight battles and further trade for France. It was natural to name it after his son, who was the promise of the future of France made flesh.

For sailors and merchants in France’s many port cities, the naming of ships was closely tied to religion. In the late fifteenth century, the Church was often intimately involved in the christening of a vessel. At Jumièges Abbey in Normandy, for example, the clergy led the people through the town to the port in a solemn procession, at the end of which they boarded the ship to recite the Prologue to the Gospel of Saint John at the stern and the bow. [5] Most ships in the first half of the sixteenth century were named after saints. Mariners hoped that this might increase their chances of saintly intercession when they inevitably encountered dangerous sea conditions.

However, this tendency was largely abandoned from the 1550s onwards. In La Rochelle, owners turned to names that evoked danger, like La Bonne Adventure, or to real and fantastical animals. There were, however, some who straddled the divide by choosing animals associated with Christ and the saints, like Le Pélican. [6] No doubt this sea change was a product of increased interest in Protestantism. Ports were among the first cities to feel the influence of the new faith, due to their trade links across multi-confessional Europe. Everyday and irreverent names stood in contrast to the import placed on saints’ names and marked in many cases a rejection of the teachings of the Catholic Church.

What then was the cultural significance of naming the ship in Marseille the Charlotte Catherine? In part, it was the early modern equivalent of public relations. The king was habitually based in and around Paris, so his subjects in the south had little direct experience of him. Appearing on the ship and offering the royal names demonstrated that Charles was attuned to the importance of the sea to Marseille residents, both in terms of their livelihood and their identity. The Charlotte Catherine would also act as a constant reminder that Charles had deigned to visit the city.

But we should also think about the christening in the context of the religious change that had swept through France by 1564. It is particularly remarkable that the naming was preceded by the celebration of Mass. Charles traversed the kingdom from 1564 to 1566 with the specific aim of establishing peace and limited religious toleration after the first Civil War (1562-1563). Hosting a Mass on the ship indelibly linked the name to Catholic ritual. Perhaps the whole affair was designed to prove the king’s own Catholic credentials.

Certainly those who named ships in the sixteenth century knew that their choice articulated a wider message to those who encountered the vessel. Although traditions and trends helped to shape these choices, the symbolism could be unique to a ship. Here in the twenty-first century, we await the message that NERC will articulate to the public when it chooses to accept or reject the winning name for its research vessel.