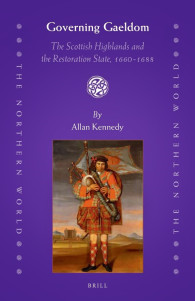 Governing Gaeldom: The Scottish Highlands and the Restoration State, 1660-1688

by Dr. Allan Kennedy (Research Associate in British/Scottish History, SALC) has been shortlisted for

the Saltire Society History Book of the Year award.

Conventional accounts of the Scottish Highlands tend to assume that they remained detached from the mainstream of British affairs until well into the eighteenth century. In Governing Gaeldom, Allan Kennedy challenges this perception through detailed analysis of the relationship between the Highlands and the Scottish state during the reigns of Charles II and James VII & II.

Drawing upon a wide range of sources, Kennedy traces the political, social, ecclesiastical and economic linkages between centre and periphery, demonstrating that the Highlands were much more tightly integrated than hitherto assumed. At the same time, he reconstructs the development of Highland policy, placing it within its proper context of the absolutist pretensions of the late-Stuart monarchy. The result is a thorough reinterpretation which offers fresh insights into the process of state-formation in early-modern Britain.

In the words of the shortlisting committee:

“Governing Gaeldom has been recognised as an archivally sound book which makes an original contribution to our knowledge and understanding, and fills a major gap not just in Highland history but in British State formation.”